This is one of the biggest and best-looking horror films of 2006; ironically, it was consigned to brief midnight movie screenings (in R-rated form) before heading off to home video, where it could be seen, unrated, in all its gory glory. The uncut version is a rip-roaring, blood-spattered blast of high-octane entertainment that is thoroughly enjoyable, exuberant fun that could have found a wide audience, despite the graphic and occasionally tasteless material that caused the ratings problems.
FEAST works so well because it is a movie-movie that revels in its own artifice: the film openly reminds viewers that they are watching a movie, going gleefully over the top with its outrageous gore (not to mention disgusting monster sex), while simultaneously undermining genre expectations. Each human character is introduced with a subtitle giving a generic name, an occupation, and a life expectancy (e.g., “Name: Hero. Life Expectancy: Pretty Fucking Good!”) and then, as often as not, blowing the prediction out of the water.
The script by Dunston and Melton follows in the time-honored tradition of NIGHT OF THE LIVING DEAD, taking a disparate group of characters and trapping them in an isolated building (in this case a bar) besieged by ravenous monsters outside. The outrageous action that ensues is matched by director Gulager’s frenetic camera angles and high-speed editing, which turns the viewing experience into a high-grade adrenaline rush that almost never lets up from the opening moments until the final climax.

There is a small downside to the stylistic hysteria: the film becomes a lightening-paced fun house ride in which the gore and violence is rendered as an action-packed spectacle – full of suspense and thrills but devoid of emotional resonance. Consequently, when the film breaks one of the (usually) sacred taboos of the genre, killing off a child early on, the reaction is not one of horror and shock but more one of admiration that the filmmakers had the nerve to do the unthinkable. Most of the other deaths have a similar (lack of) impact, with the intentionally generic characters popped off like targets in a shooting gallery.
The silver lining to this dark cloud is that the film can – and often does – get away with almost anything, serving up decapitations and oral rape with equal gusto while never making us sympathize with the on-screen plight to the point where we might turn away in disgust. It’s obviously all make-believe, jolting the senses without offending the sensibilities, creating a galvanic response that makes FEAST one of the great audience-enthusiasm horror movies. It may be fun to watch on your television alone at night, but the experience really takes on expanded life in a crowd of enthusiastic viewers, hooting and hollering at the film’s verve and nerve. FEAST is too giddy to be truly ghastly; it simply serves up its horror with all the relish of the Grand Guignol tradition, like a full-frontal assault, without apology or restraint. 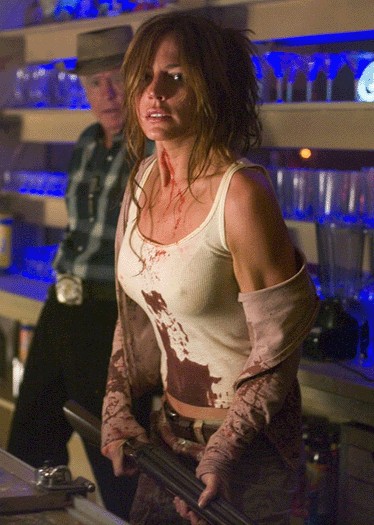 The outrageous content earned FEAST an NC-17 rating from the MPAA. When released theatrically, the film was cut down for an R-rating. The DVD presents the unrated version, uncut. Among the restored footage is a disgusting moment at the end of a scene in which one of the female characters is raped by a monster – in her mouth. The fragmented editing leaves no doubt about what’s happening but prevents viewers from getting a clear look. Restored in the DVD is a shot whrein she spews white fluid from her mouth. Director John Gulager, responding to outraged viewers about how he could have filmed such a scene, responded, “That’s show business!”

FEAST was the result of a contest at Project Greenlight, a company set up by actors Matt Damon and Ben Affleck. In return for financing, director John Gulager and his crew were filmed during production for a reality television show, which aggravated all the usual on-set tension. Gulager (son of actor Clu Gulager [RETURN OF THE LIVING DEAD], who plays the filmâ€™s bartender) was ambivalent about the process: grateful that it gave him the money to make the film but unhappy with having dirty laundry aired in public.
“There are conversations that you have to have, because you’re making a film, that should be private,” he said after an October 2006 screening of the unrated version at the Screamfest Film Festival in Hollywood, “but we knew they were going to be on television. And then we would be interviewed about what we had said.”
Gulager also lamented the theatrical distribution of the movie. “It sucks!” he said, adding, “We could never figure it out. We’re getting a lot of airplay now, and it’s great that it’s coming out on DVD, but fuck, man, why couldn’t they do that for the midnight screenings? Nobody knew it was out. Now we have 140 35mm prints available for college screenings across the country.”
FEAST deserved a better shot in theatres than it got. Ironically, Screamfest screened the film immediately after SLITHER, which came out on DVD the same day – a film that got a major theatrical release from Universal Pictures and then fell flat on its face at the box office because its sensibility is entirely of a midnight-movie cult variety. FEAST might not have been a blockbuster, but it had a shot at being a sleeper hit if distributor Dimension Films had gotten the word out.
The silver lining to the story is that the project has opened doors. At the Screamfest screening, writers Marcus Dunstan and Patrick Melton said they were developing a murder-mystery television show and have another feature film planned, with Gulager involved. (In fact, they ended up scripting SAW IV for director Darren Lynn Bousman.) Gulager declined to discuss details, saying only that he has “another movie with Dimension, but I can’t say what it is. It’s a secret.”