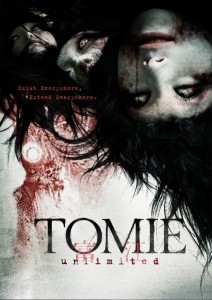 If you enjoy cinematic outrageousness for its own sake, you may have a good time with <strong>Tomie: Unlimited</strong>; unfortunately, the film’s real strength is buried beneath the special effects.

For those of you who do not know, Tomie is the also-ran in the Japanese creepy girl sweepstakes. If Sadako (Ring) and Kayako (Ju-on) are Dracula and Frankenstein of J-Horror, respectively, then Tomie is maybe the Wolf Man or more likely the Mummy: she is a popular favorite, but she is no contender for the crown. Although she frequently returns from the dead, Tomie is not a yūrei, bōrei, shiryō, or any other variation on the Japanese concept of a ghost; she is some kind of inexplicable mutant, origin unknown, whose body can regenerate endless copies of herself, with personality and memories intact, though often deformed physically. She is also effortlessly attractive to men, driving them into jealous rages in which they kill each other and frequently her as well. Originating in a manga by Junji Ito, Tomie has appeared in eight films and one three-episode TV series, which means she has actually made as many or more on-screen appearances in Japan as either of her rival scream-inducers*, but in this case quantity is no guarantee of quality. Her most recent effort, Tomie: Unlimited (2011; original title: Tomie Anrimiteddo) is far from a gateway drug that will hook you into the rest of the series, but it will give you some idea what the character is about.


The film focuses on Tsukiko (Moe Arai), an amateur high school photographer, who is jealous of Toshio (Kensuke Owada)’s interest in her older sister, Tomie (Miu Nakamura). Fortunately for Tsukiko (so to speak), her romantic pathway to Toshio is cleared when Tomie is killed in a bizarre accident: a cross-shaped piece of metal impales her while Tsukiko’s camera, dropped in panic, clicks picture after picture of the carnage.
Right about now, viewers familiar with Tomie are wondering: If the character’s origins are a mystery, how can she be someone’s older sister? Don’t worry about that right now, because the film will not bother to address the issue until much later, though in this case “address” is probably too strong a word.
Anyway, a year later, Tsukiko’s attempts to move on with her life are plagued by nightmares and by her parent’s insane obsession with the departed Tomie, to whom they sing happy birthday (complete with cake) on the day she would have turned eighteen. The celebration is interrupted by a knock on the door, which turns out to be Tomie, as good as new, her miraculous resurrection completely unexplained – not that anyone even questions her mysterious return. Old jealousies are reignited as Tomie again catches Toshio’s eye, and the familiar cycle of carnage erupts, resulting in multiple deaths and resurrections for the title character, while Tsukiko tries to navigate the nightmare engulfing her family and friends.
For its first third, Tomie: Unlimited shows promise. The situation is a monstrous joke: death is expected to create irrevocable change, which humans must learn to accept, but here, much to Tsukiko’s dismay, the change is summarily revoked as if  by a giant Reset button in the sky. The story plays like an extreme twist on the familiar drama of survivor’s guilt. Tomie’s demise has given Tsukiko a chance to get what she wants, but instead of feeling guilty over taking advantage of the opportunity, Tsukiko’s “good” fortune is abruptly terminated by the reappearance of her older sister, who immediately becomes the center of everyone’s attention, forcing Tsukiko to remain where she has always been – on the sidelines. 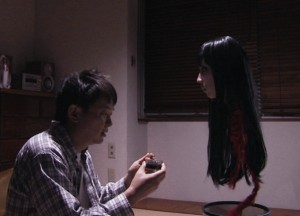 Unfortunately, the film is not interested in exploring this idea. Tomie: Unlimited is all about creating as many mutant versions of its titular character as possible. This starts when her father goes nuts and kills her, cutting her up into pieces, all of which have the potential to regenerate, including a half-dozen faces in a box of sushi, a head which balances on a spinal cord while emerging from a wastebasket, and a caterpillar version (which tears someone in half, rendered in CGI unworthy of a bad videogame). After a while, I started to lose track of all the different Tomies, and I’m pretty sure the filmmakers did as well; at a certain point, the script seems content to have one show up whenever there’s a need for another scare scene.  Eventually, the film begins to feel like a vaudeville “variety” show in which all the different acts feature the same performer.
At this point, the gonzo gore takes over, and the film treats us to several set pieces, which are so over-the-top as to be more laughable than horrific: for example, a new Tomie grows like a pimple on a girl’s neck, so a gang of rowdy guys cut off the original head to make way for the parasite to take over; the one who actually wields the garden sheers acts as if his actions were accidental, even though they were clearly deliberate and everyone in the room is happy with the result. The result was perhaps intended to reach the giddy heights of Evil Dead II. It falls short. 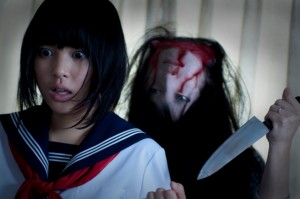 After enough mayhem has ensued to stretch the film to feature length (in this case 85 minutes), we get one of those “it was all a dream but really not” twists, which kinda, sorta explains how Tomie is Tsukiko’s older sister (she has grown so powerful that she can impinge “on reality”). It turns out that the endlessly attractive Tomie is fascinated by Tsukiko’s outsider status, offering her a chance to merge together so that Tsukiko can finally experience what it’s like to be the center of attention.
This leads to an interesting sequence in which the new, hybrid Tomie-Tsukiko (seen only from behind) walks down the street, viewing numerous other Tomie’s engaged in happy social interaction (curiously, no one else seems to notice the exact same woman showing up in multiple locations, but may this is just another dream). Tsukiko gets to be the center of Toshio’s attention – though, true to form for Tomie, that attention manifests in grizzly fashion.
Production values and makeup effects are mostly good. The prosthetics are sometimes rubbery, but that is no doubt part of the nostalgic charm, reminiscent of ’80s horror films. CGI is variable. The performers do a fine job of registering the melodramatic reactions inspired by Tomie (adoration turns homicidal like the flip of a switch). Miu Nakamura is a highlight in the title role, insinuating and seductive, with an eerie, calm confidence that is chilling. Moe Arai manages to make us care about Tsukiko’s plight – quite an achievement in a film more focused on “anything goes” effects.

If you enjoy cinematic outrageousness for its own sake, you may have a good time with Tomie: Unlimited, but frankly there are other Japanese gonzo gore movies that fly farther over-the-top into insanity, with a much faster pace. Tomie: Unlimited‘s real strength lies in the beguiling and sinister charm of its lead character, whose emotional predations are the real source of horror. Sadly, this facet is buried beneath latex, drowned in blood, and eclipsed by computer graphics.
Footnote: