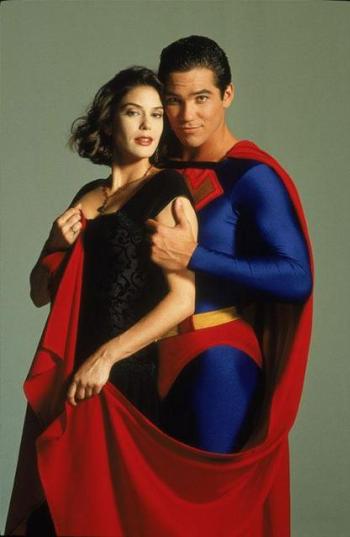 Entertainment Weekly announced Teri Hatcher will play Lois Lane’s mother, Ella Lane on the CW’s SMALLVILLE.
In the eighth episode of this 10th and final season, ‘Abandoned’, Lois Lane (Erica Durance) will find video-taped “letters” from her deceased mother. Teri Hatcher will be seen on these videos.
As fans will remember, Hatcher played Lois Lane in ABC’s LOIS AND CLARK, opposite Dean Cain’s Clark Kent/Superman.
The episode is tentatively set in November.
SMALLVILLE returns this Friday Sept. 24th at 8:00 pm/7 Central on the CW with ‘Lazarus’.

The CW’s Official Description:
The season premiere picks up where the finale left off. Lois finds Clark’s (Tom Welling) lifeless body and removes the blue kryptonite enabling him to heal himself. Lois sneaks away before Clark fully awakens in order to protect his secret.
Chloe (Alison Mack) is desperate to find Oliver (Justin Hartley), so she turns to an unlikely source for answers.
Jonathan Kent (John Schneider) returns to the Kent Farm with a message for Clark, and Tess (Cassidy Freeman)  awakens in a LuthorCorp lab.

Just to bring you up to speed on the above, and why the title Lazarus is particularly apt — Clark was last seen falling off a building with a dagger of power-removing Blue Kryptonite in his side.
Oliver had disappeared, apparrently taken by force in an ultra-mundane fashion.  Tess Mercer had been declared dead, burned a crisp by Zod’s heat vision, when a strange, grandmotherly-looking type scurried into her hospital room.  And Jonathan Kent has been dead for years.
Interesting stuff.