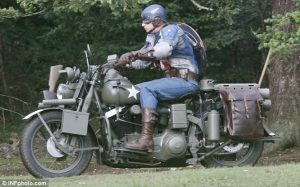 The U.K.’s Daily Mail is featuring the first looks at what is at least one of the costumes of the lead character in CAPTAIN AMERICA: THE FIRST AVENGER.
A group of photos from a location shoot in a wooded road near London show Chris Evan’s stunt double decked out in a World War Two version of the costume, complete with ‘winged’ crash helmet, riding  what they identify as a US Army Indian motorcycle.
The costume is pretty baggy, and for some unguessable reason in a powder blue, rather than the darker blue shown in the design sketches. In my opinion, Cap needs to be in a very dark blue, more like the indigo used in the American flag.  The lighter, “process blue” generally used in the comics is really due to the needs of cheap and clear 4-color printing, rather than other aesthetic concerns.
The reverse angle of this photo, which can be seen at the Daily Mirror site, shows that Captain America is carrying a holstered pistol, and has some kind of rifle in a cycle-mounted holder.


Also to be seen is a neat looking period roadster, complete with WWII-era ‘black-out’ covers on the head lamps, and these high tech cycles ridden, it seems by the Red Skull’s minions.
UPDATED: On closer inspection, the insignia on the motorcycles seems to be that of HYDRA, the international nihilist terror organization that Captain America and SHIELD would face in the 1960’s. Apparently, in the film the Red Skull creates HYDRA, and in the comics has been retconned as one of the founders.